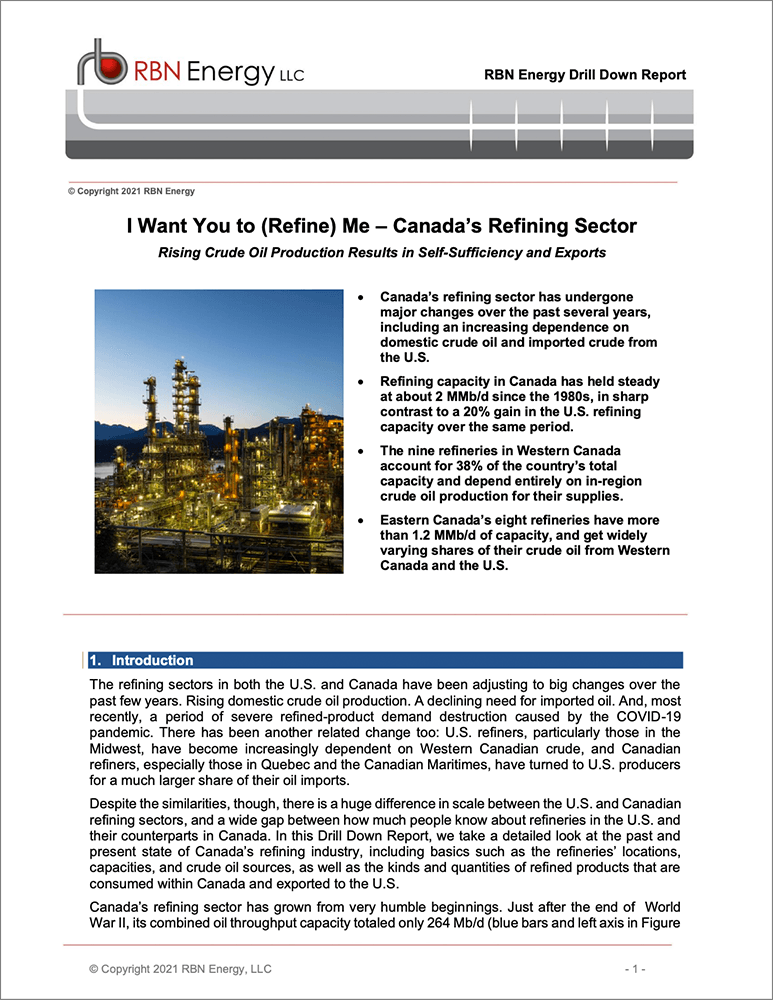 The refining sectors in both the U.S. and Canada have been adjusting to big changes over the past few years. Rising domestic crude oil production. A declining need for imported oil. And, most recently, a period of severe refined-product demand destruction caused by the COVID-19 pandemic. There has been another related change too: U.S. refiners, particularly those in the Midwest, have become increasingly dependent on Western Canadian crude, and Canadian refiners, especially those in Quebec and the Canadian Maritimes, have turned to U.S. producers for a much larger share of their oil imports.

Despite the similarities, though, there is a huge difference in scale between the U.S. and Canadian refining sectors, and a wide gap between how much people know about refineries in the U.S. and their counterparts in Canada. In this Drill Down Report, we take a detailed look at the past and present state of Canada’s refining industry, including basics such as the refineries’ locations, capacities, and crude oil sources, as well as the kinds and quantities of refined products that are consumed within Canada and exported to the U.S.

I Want You to (Refine) Me is included in RBN Energy’s 2021 Drill Down report series, a suite of reports covering many of the key issues expected to impact the markets for crude oil, natural gas and natural gas liquids. Drill Down reports are part of RBN Backstage Pass™ premium resources that also include Blog Archive Access, Spotcheck Indicators, Market Fundamentals Webcasts, Get-Togethers and more. By subscribing to RBN’s Backstage Pass™ Premium Services, you plug into our network and get direct access to our premium resources.

Download a preview of I Want You to (Refine) Me