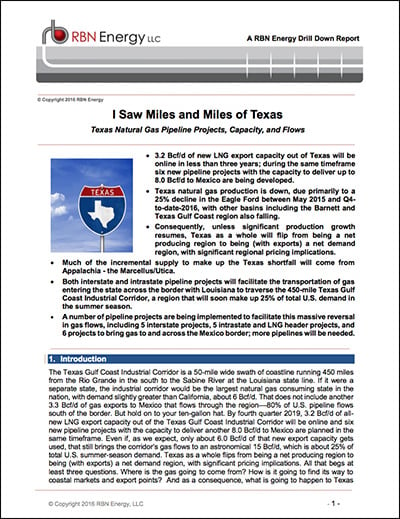 The Texas Gulf Coast Industrial Corridor is a 50-mile wide swath of coastline running 450 miles from the Rio Grande in the south to the Sabine River at the Louisiana state line. If it were a separate state, the industrial corridor would be the largest natural gas consuming state in the nation, with demand slightly greater than California, about 6 Bcf/d. That does not include another 3.3 Bcf/d of gas exports to Mexico that flows through the region - 80% of U.S. pipeline flows south of the border. But hold on to your ten-gallon hat. By Q4 2019, 3.2 Bcf/d of all-new LNG export capacity out of the Texas Gulf Coast Industrial Corridor will be online and six new pipeline projects with the capacity to deliver another 8.0 Bcf/d to Mexico are planned in the same timeframe. Even if, as we expect, only about 6.0 Bcf/d of that new export capacity gets used, that still brings the corridor’s gas flows to an astronomical 15 Bcf/d, which is about 25% of total U.S. summer-season demand. Texas as a whole flips from being a net producing region to being (with exports) a net demand region, with significant pricing implications. All that begs at least three questions. Where is the gas going to come from? How is it going to find its way to coastal markets and export points?  And as a consequence, what is going to happen to Texas natural gas prices?  Those issues are front and center in this RBN Drill Down Report, the third in our series titled Miles and Miles of Texas.

I Saw Miles and Miles of Texas - Part 3: Texas Natural Gas Pipeline Projects, Capacity, and Flows is the 10th in RBN Energy’s 2016 Drill Down report series, a suite of monthly reports covering many of the key issues expected to impact the markets for crude oil, natural gas and natural gas liquids. Drill Down reports are part of RBN Backstage Pass™ premium resources that also include Blog Archive Access, Spotcheck Indicators, Market Fundamentals Webcasts, Get-Togethers and more. By subscribing to RBN’s Backstage Pass™ Premium Services, you plug into our network and get direct access to our premium resources.