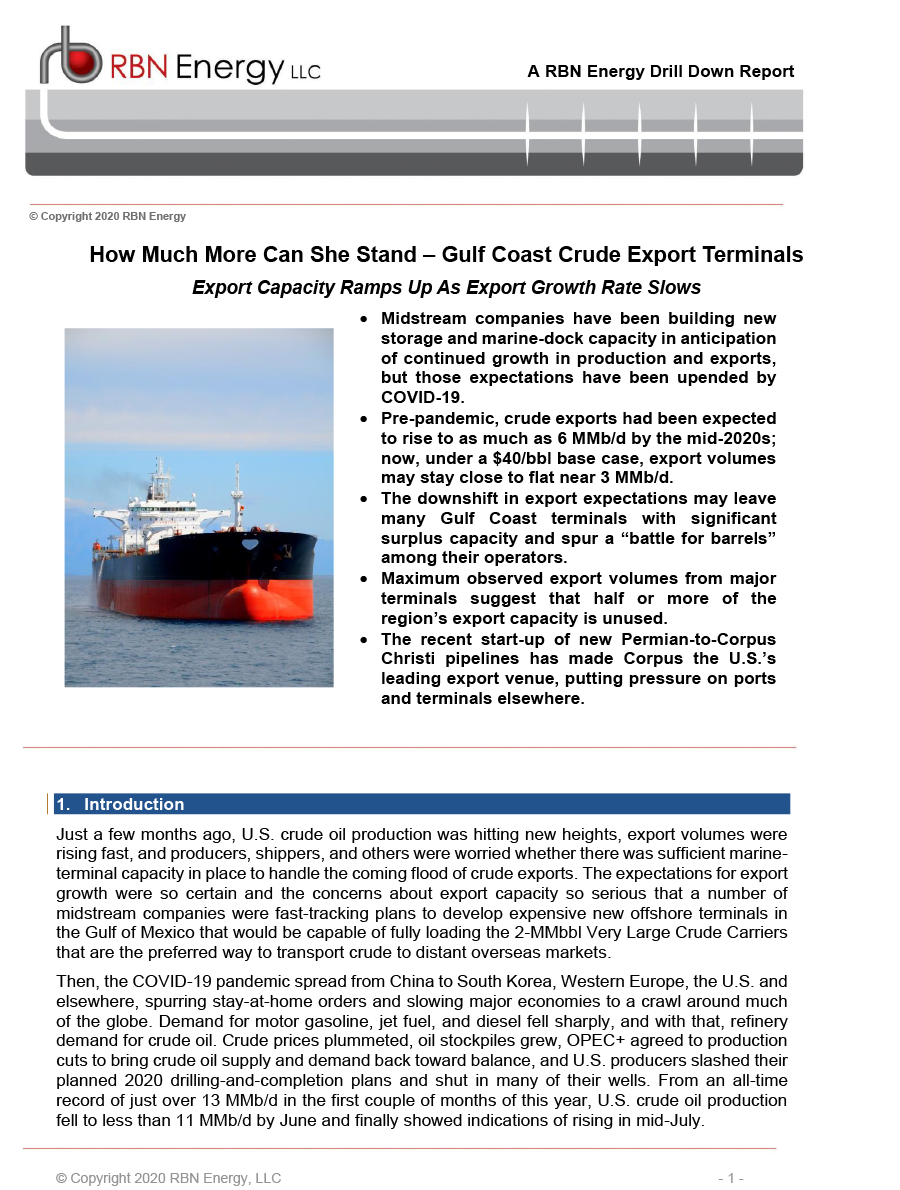 Just a few months ago, U.S. crude oil production was hitting new heights, export volumes were rising fast, and producers, shippers, and others were worried whether there was sufficient marine-terminal capacity in place to handle the coming flood of crude exports. The expectations for export growth were so certain and the concerns about export capacity so serious that a number of midstream companies were fast-tracking plans to develop expensive new offshore terminals in the Gulf of Mexico that would be capable of fully loading the 2-MMbbl Very Large Crude Carriers that are the preferred way to transport crude to distant overseas markets.

While the worry just a few months ago was whether there would be enough export capacity in place, the question now may be, how fierce will the “battle for barrels” among export terminals be? A review of the major crude-handling marine terminals along the Gulf Coast indicates that there is ample capacity available to deal with current and expected volumes of crude exports, and even to deal with a significant increase in export volumes, if that were to occur.

Estimating how much crude oil a terminal can export on a steady, reliable basis is an inexact science. There are many factors to consider, such as inbound pipeline capacity, on-site storage capacity, pumping capacity, and the size of the tankers — or supertankers — that can use the terminal. Given the range of variables, a good baseline to use for establishing a marine terminal’s reliable, repeatable capacity for exporting crude oil is to determine the highest level of export volumes it has managed to maintain for a 30-day period.

“How Much More Can She Stand” is included in RBN Energy’s 2020 Drill Down report series, a suite of reports covering many of the key issues expected to impact the markets for crude oil, natural gas and natural gas liquids. Drill Down reports are part of RBN Backstage Pass™ premium resources that also include Blog Archive Access, Spotcheck Indicators, Market Fundamentals Webcasts, Get-Togethers and more. By subscribing to RBN’s Backstage Pass™ Premium Services, you plug into our network and get direct access to our premium resources.