New Pipelines Coming, But Waha Basis at Risk Until They Do 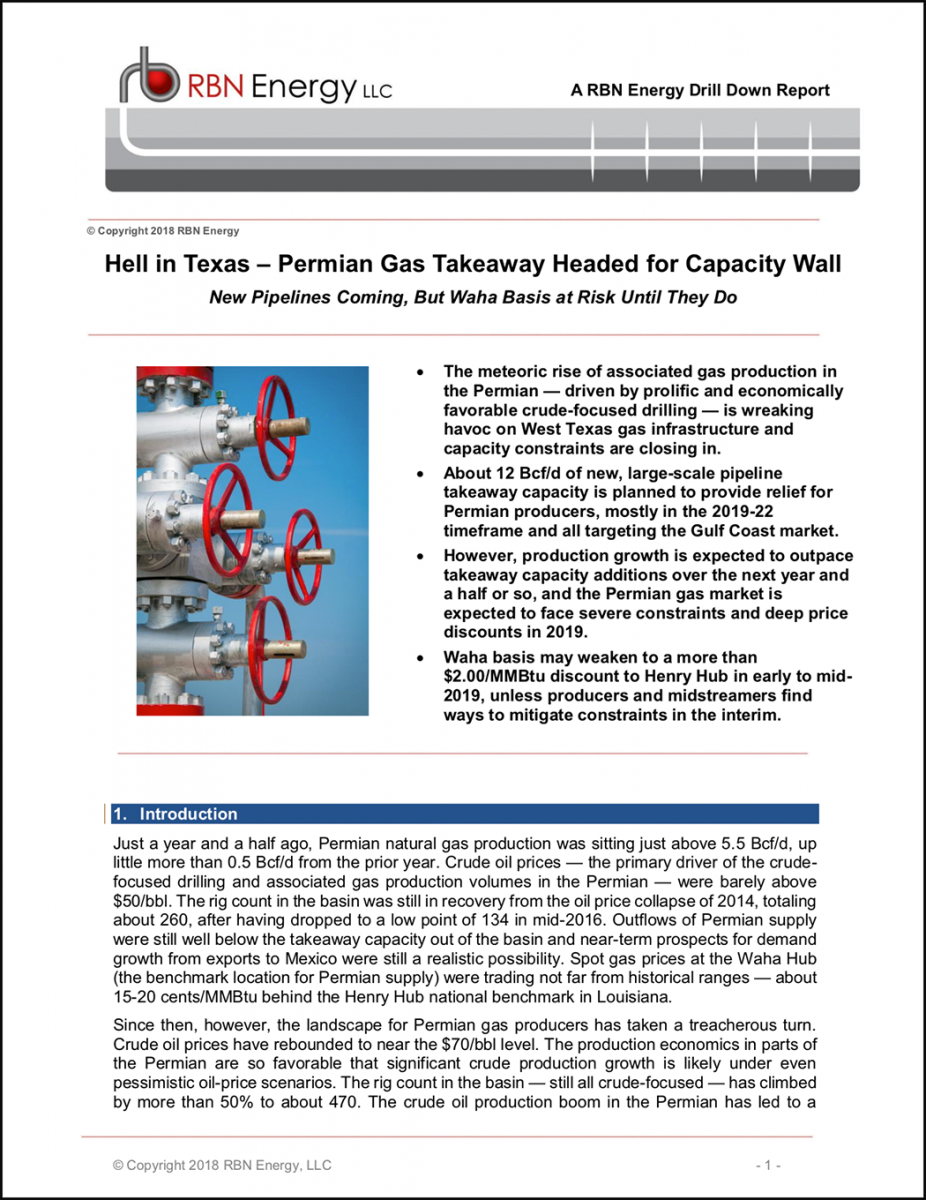 Just a year and a half ago, Permian natural gas production was sitting just above 5.5 Bcf/d, up little more than 0.5 Bcf/d from the prior year. Crude oil prices — the primary driver of the crude-focused drilling and associated gas production volumes in the Permian — were barely above $50/bbl. The rig count in the basin was still in recovery from the oil price collapse of 2014, totaling about 260, after having dropped to a low point of 134 in mid-2016. Outflows of Permian supply were still well below the takeaway capacity out of the basin and near-term prospects for demand growth from exports to Mexico were still a realistic possibility. Spot gas prices at the Waha Hub (the benchmark location for Permian supply) were trading not far from historical ranges — about 15-20 cents/MMBtu behind the Henry Hub national benchmark in Louisiana.

Since then, however, the landscape for Permian gas producers has taken a treacherous turn. Crude oil prices have rebounded to near the $70/bbl level. The production economics in parts of the Permian are so favorable that significant crude production growth is likely under even pessimistic oil-price scenarios. The rig count in the basin — still all crude-focused — has climbed by more than 50% to about 470. The crude oil production boom in the Permian has led to a precipitous rise in associated natural gas liquids (NGLs) and dry gas production from the West Texas/southeastern New Mexico basin.

In this Drill Down Report, we focus on the effects that surging gas supply from the Permian is having on pipeline utilization and prices in Texas, including developing constraints. We then provide detailed discussion of the infrastructure expansions announced to solve the problem, before combining our supply and takeaway capacity outlook to present a thesis for how we see the Permian and overall Texas market evolving over the next five years.

Hell in Texas is included in RBN Energy’s 2018 Drill Down report series, a suite of reports covering many of the key issues expected to impact the markets for crude oil, natural gas and natural gas liquids. Drill Down reports are part of RBN Backstage Pass™ premium resources that also include Blog Archive Access, Spotcheck Indicators, Market Fundamentals Webcasts, Get-Togethers and more. By subscribing to RBN’s Backstage Pass™ Premium Services, you plug into our network and get direct access to our premium resources.