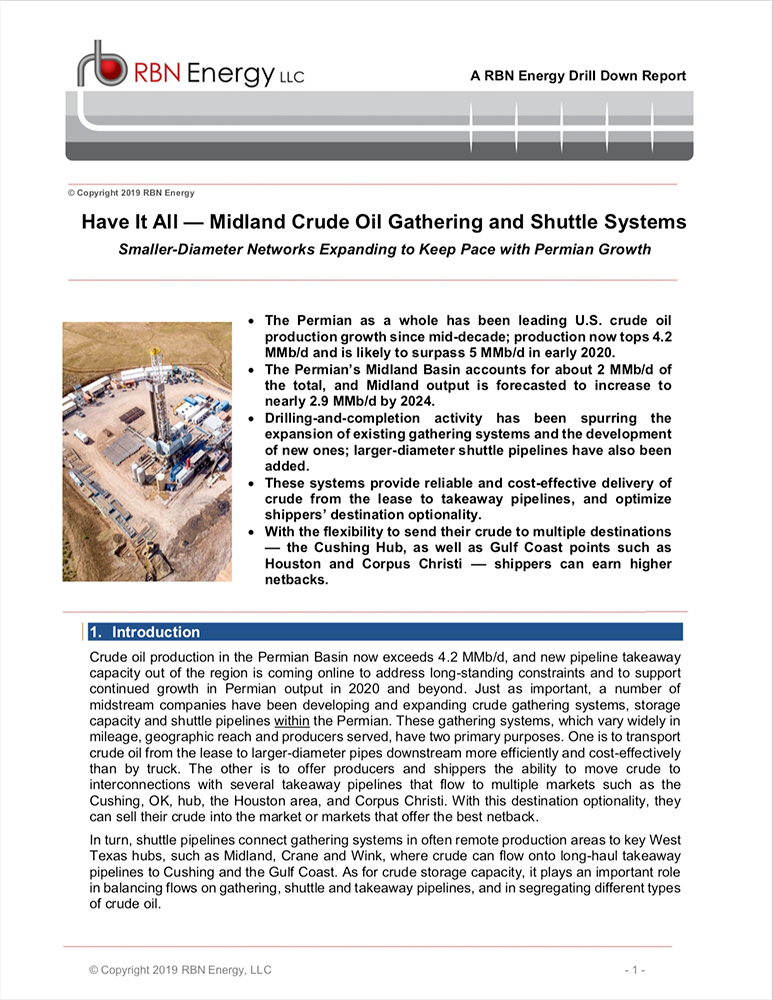 Crude oil production in the Permian Basin now exceeds 4.2 MMb/d, and new pipeline takeaway capacity out of the region is coming online to address long-standing constraints and to support continued growth in Permian output in 2020 and beyond. Just as important, a number of midstream companies have been developing and expanding crude gathering systems, storage capacity and shuttle pipelines within the Permian. These gathering systems, which vary widely in mileage, geographic reach and producers served, have two primary purposes. One is to transport crude oil from the lease to larger-diameter pipes downstream more efficiently and cost-effectively than by truck. The other is to offer producers and shippers the ability to move crude to interconnections with several takeaway pipelines that flow to multiple markets such as the Cushing, OK, hub, the Houston area, and Corpus Christi. With this destination optionality, they can sell their crude into the market or markets that offer the best netback.

In this, the first part of a two-part Drill Down Report on Permian crude oil gathering systems, we will focus on representative systems within the Midland Basin; Part 2 will look at systems in the Delaware Basin.

“Have It All” is included in RBN Energy’s 2019 Drill Down report series, a suite of reports covering many of the key issues expected to impact the markets for crude oil, natural gas and natural gas liquids. Drill Down reports are part of RBN Backstage Pass™ premium resources that also include Blog Archive Access, Spotcheck Indicators, Market Fundamentals Webcasts, Get-Togethers and more. By subscribing to RBN’s Backstage Pass™ Premium Services, you plug into our network and get direct access to our premium resources.