Canadian and U.S. Gas Producers in for Fight of Their Lives 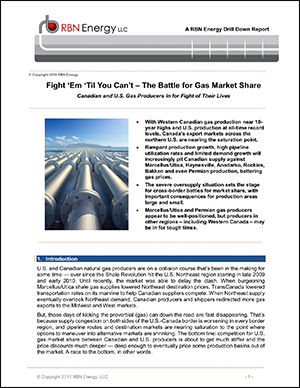 U.S. and Canadian natural gas producers are on a collision course that’s been in the making for some time — ever since the Shale Revolution hit the U.S. Northeast region starting in late 2009 and early 2010. Until recently, the market was able to delay the clash. When burgeoning Marcellus/Utica shale gas supplies lowered Northeast destination prices, TransCanada lowered transportation rates on its mainline to help Canadian suppliers compete. When Northeast supply eventually overtook Northeast demand, Canadian producers and shippers redirected more gas exports to the Midwest and West markets.

This Drill Down Report includes four interactive maps — three regional maps that zero in specific infrastructure discussed in the report and one comprehensive map that ties it all together and shows how the pipelines interrelate. The maps are built with RBN’s Midstream Infrastructure Database Interface (MIDI). MIDI users can zoom in on the import and/or export pipelines connecting Canada with specific U.S. regions (the Northeast, Midwest and West); highlight international border points; add satellite imagery; and reveal additional information about the pipelines.

But, those days of kicking the proverbial (gas) can down the road are fast disappearing. That’s because supply congestion on both sides of the U.S.-Canada border is worsening in every border region, and pipeline routes and destination markets are nearing saturation to the point where options to maneuver into alternative markets are shrinking. The bottom line: competition for U.S. gas market share between Canadian and U.S. producers is about to get much stiffer and the price discounts much deeper — deep enough to eventually price some production basins out of the market. A race to the bottom, in other words.

In this Drill Down Report, we take a detailed look at the supply-demand fundamentals on both sides of the Canada-U.S. border, before we dive into the infrastructure and flow analysis to assess how supply growth has affected cross-border flows and pipeline utilization across each of the border regions. From there, we take a forward look at pipeline capacity additions and other factors that will exacerbate supply competition and ultimately force a producer showdown. And, finally, we’ll conclude with an assessment of the potential winners and losers.

Fight ‘Em ‘Til You Can’t is included in RBN Energy’s 2018 Drill Down report series, a suite of reports covering many of the key issues expected to impact the markets for crude oil, natural gas and natural gas liquids. Drill Down reports are part of RBN Backstage Pass™ premium resources that also include Blog Archive Access, Spotcheck Indicators, Market Fundamentals Webcasts, Get-Togethers and more. By subscribing to RBN’s Backstage Pass™ Premium Services, you plug into our network and get direct access to our premium resources.

Download a preview of Fight 'Em 'Till You Can't