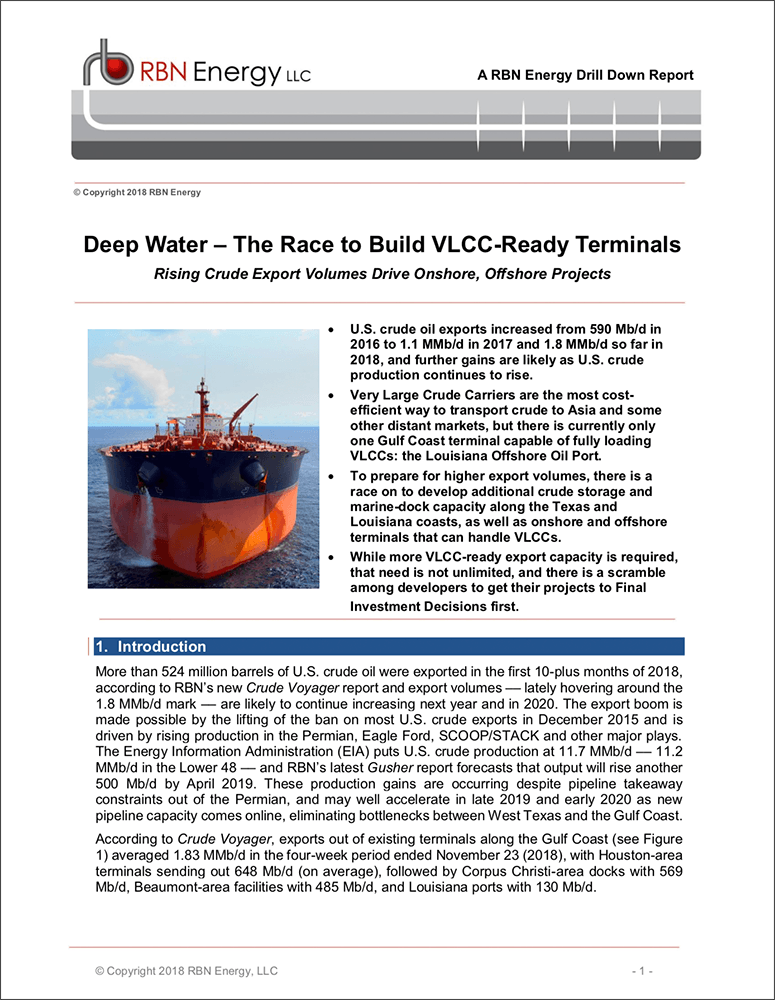 More than 524 million barrels of U.S. crude oil were exported in the first 10-plus months of 2018, according to RBN’s new Crude Voyager report and export volumes — lately hovering around the 1.8 MMb/d mark — are likely to continue increasing next year and in 2020. The export boom is made possible by the lifting of the ban on most U.S. crude exports in December 2015 and is driven by rising production in the Permian, Eagle Ford, SCOOP/STACK and other major plays. The Energy Information Administration (EIA) puts U.S. crude production at 11.7 MMb/d — 11.2 MMb/d in the Lower 48 — and RBN’s latest Gusher report forecasts that output will rise another 500 Mb/d by April 2019. These production gains are occurring despite pipeline takeaway constraints out of the Permian and may well accelerate in late 2019 and early 2020 as new pipeline capacity comes online, eliminating bottlenecks between West Texas and the Gulf Coast.

This Drill Down Report focuses primarily on the projects that would involve the construction of new offshore or onshore terminals with the ability to fully load VLCCs. The report also discusses ongoing efforts at LOOP — its existing capabilities as well as the efforts to enable a wider variety of U.S. and Canadian crudes to flow to LOOP’s Clovelly storage hub, the staging point for crude exported through the offshore terminal.

Deep Water is included in RBN Energy’s 2018 Drill Down report series, a suite of reports covering many of the key issues expected to impact the markets for crude oil, natural gas and natural gas liquids. Drill Down reports are part of RBN Backstage Pass™ premium resources that also include Blog Archive Access, Spotcheck Indicators, Market Fundamentals Webcasts, Get-Togethers and more. By subscribing to RBN’s Backstage Pass™ Premium Services, you plug into our network and get direct access to our premium resources.