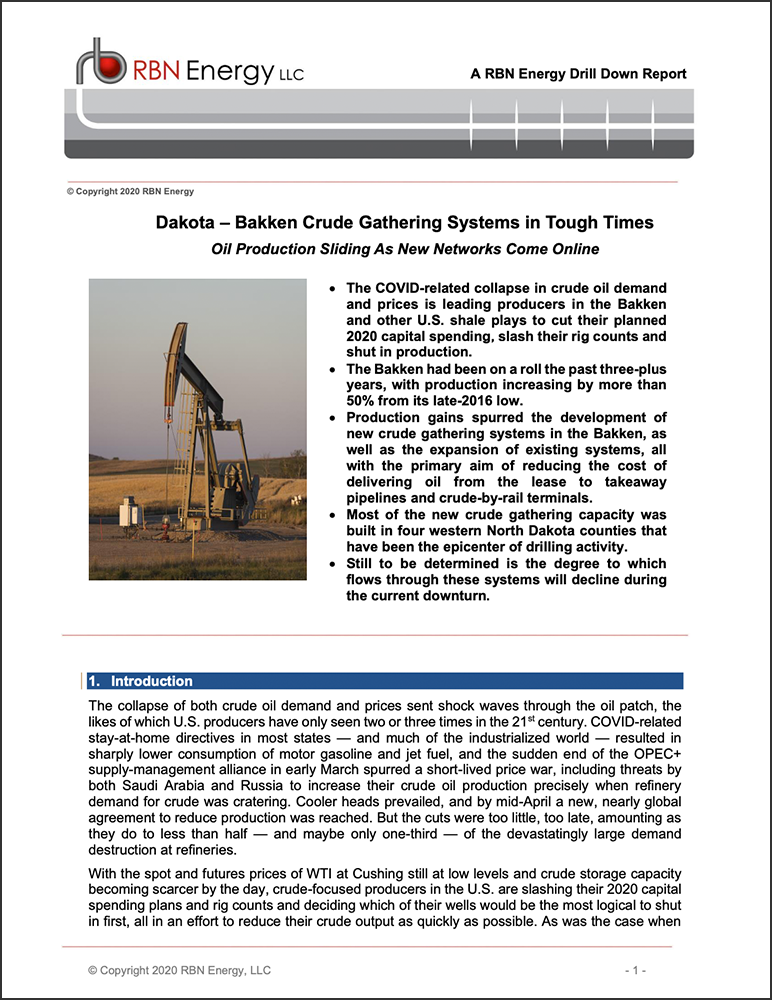 The collapse of both crude oil demand and prices sent shock waves through the oil patch, the likes of which U.S. producers have only seen two or three times in the 21st century. COVID-related stay-at-home directives in most states — and much of the industrialized world — resulted in sharply lower consumption of motor gasoline and jet fuel, and the sudden end of the OPEC+ supply-management alliance in early March spurred a short-lived price war, including threats by both Saudi Arabia and Russia to increase their crude oil production precisely when refinery demand for crude was cratering. Cooler heads prevailed, and by mid-April a new, nearly global agreement to reduce production was reached. But the cuts were too little, too late, amounting as they do to less than half — and maybe only one-third — of the devastatingly large demand destruction at refineries.

There has been a sharp decline in Bakken crude production in the spring of 2020, which comes on the heels of what has been a significant build-out of crude gathering systems. Crude gathering pipelines play a critically important — but often overlooked — role in the midstream sector. The new crude gathering systems that have come online in the past two or three years are concentrated in a relatively small area, in this case four western North Dakota counties — McKenzie, Dunn, Williams and Mountrail — that together account for nearly 90% of the play’s total crude production. The systems were developed by producers, midstream affiliates of producers and independent midstreamers in anticipation of continued growth in Bakken crude production in 2020 and beyond –– growth that now seems highly unlikely to occur in the near- to mid-term. The question now is, what will that mean for the volumes flowing through the crude gathering pipes?

Dakota is included in RBN Energy’s 2020 Drill Down report series, a suite of reports covering many of the key issues expected to impact the markets for crude oil, natural gas and natural gas liquids. Drill Down reports are part of RBN Backstage Pass™ premium resources that also include Blog Archive Access, Spotcheck Indicators, Market Fundamentals Webcasts, Get-Togethers and more. By subscribing to RBN’s Backstage Pass™ Premium Services, you plug into our network and get direct access to our premium resources.