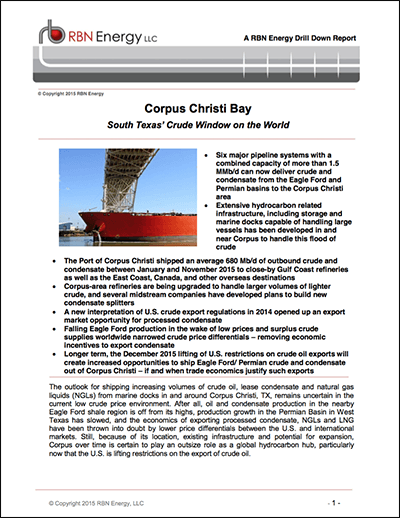 The outlook for shipping increasing volumes of crude oil, lease condensate and natural gas liquids (NGLs) from marine docks in and around Corpus Christi, TX, remains uncertain in the current low crude price environment. After all, oil and condensate production in the nearby Eagle Ford shale region is off from its highs, production growth in the Permian Basin in West Texas has slowed, and the economics of exporting processed condensate, NGLs and LNG have been thrown into doubt by lower price differentials between the U.S. and international markets. Still, because of its location, existing infrastructure and potential for expansion, Corpus over time is certain to play an outsize role as a global hydrocarbon hub, particularly now that the U.S. is lifting restrictions on the export of crude oil.

This Drill Down report--the final one in our 2015 series, comes at the end of a tumultuous year in the energy sector. In this report, we examine the status of crude/condensate production in the Eagle Ford and Permian basins connected by pipeline to Corpus Christi, as well as the six major pipeline systems themselves. The report also details regional facilities that refine crude and stabilize or split condensate, as well as the storage and marine dock facilities in Corpus that load these hydrocarbons onto vessels large and small for shipment up and down the Gulf Coast, to Canada, and to other overseas markets.

This Drill Down report concludes with an analysis of how the market forces currently in play—low crude prices, stagnating production growth, and potential infrastructure over-building among them—are likely to affect how quickly Corpus’s role is enhanced, and provides insight into the likely short and long term impact of lifting crude and condensate export restrictions.

Corpus Christi Bay: South Texas’ Crude Window on the World is the twelth of RBN Energy’s Drill Down report series, a suite of twelve reports coming from RBN during 2015 covering many of the key issues expected to impact the markets for crude oil, natural gas and natural gas liquids.