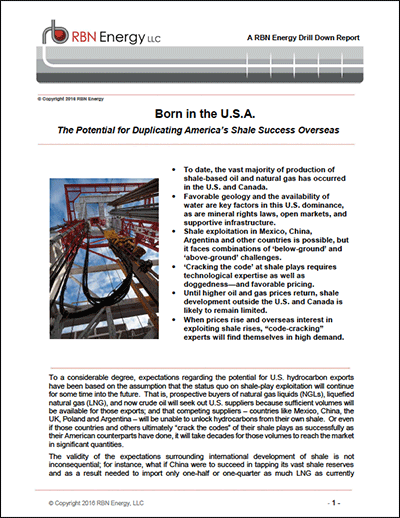 To a considerable degree, expectations regarding the potential for U.S. hydrocarbon exports have been based on the assumption that the status quo on shale-play exploitation will continue for some time into the future.  That is, prospective buyers of natural gas liquids (NGLs), liquefied natural gas (LNG), and now crude oil will seek out U.S. suppliers because sufficient volumes will be available for those exports; and that competing suppliers – countries like Mexico, China, the UK, Poland and Argentina – will be unable to unlock hydrocarbons from their own shale.  Or even if those countries and others ultimately “crack the codes” of their shale plays as successfully as their American counterparts have done, it will take decades for those volumes to reach the market in significant quantities.

The validity of the expectations surrounding international development of shale is not inconsequential; for instance, what if China were to succeed in tapping its vast shale reserves and as a result needed to import only one-half or one-quarter as much LNG as currently estimated—or none at all? Or what if Argentina or Mexico were to exploit their shale and become major hydrocarbon suppliers to their Latin American neighbors, or if UK petrochemical companies were able to rely more on locally-sourced natural gas and ethane?

In this RBN Drill Down report, we explore what to date has been the near-total U.S. dominance of hydrocarbon production from tight oil and gas formations (which we reference here generically as “shale”), and the barriers facing other nations to duplicate U.S. successes with their own shale deposits. The report begins with a brief recap of U.S. shale development, and continues with an examination of the factors—geological, legal, political, and others—that as a whole have enabled the U.S. to quickly turn around its declining oil and gas sector and re-emerge as a top-tier hydrocarbon producer. The Drill Down report then reviews a representative group of countries with significant shale resources, and considers the challenges they may face in exploiting them. The report concludes with an assessment of what is most likely to occur—and how soon--regarding international shale development, and a discussion of the effects successful shale development overseas would have on U.S. producers, midstream companies and hydrocarbon exporters.

Born in the U.S.A. – The Potential for Duplicating America’s Shale Success Overseas is the 1st in RBN Energy’s 2016 Drill Down report series, a suite of monthly reports covering many of the key issues expected to impact the markets for crude oil, natural gas and natural gas liquids. Drill Down reports are part of RBN Backstage Pass™ premium resources that also include Blog Archive Access, Spotcheck Indicators, Market Fundamentals Webcasts, Get-Togethers and more. By subscribing to RBN’s Backstage Pass™ Premium Services, you plug into our network and get direct access to our premium resources.