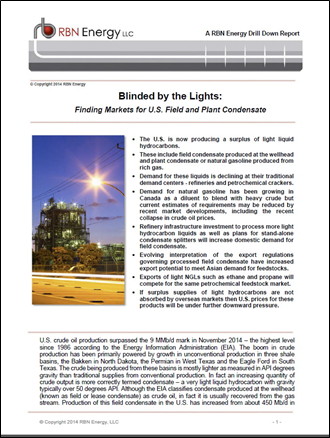 The boom in U.S. crude production over the past three years has been mostly light crude. An increasing portion of this crude output is more correctly termed condensate – a very light liquid hydrocarbon with gravity typically over 50 degrees API. Production of this field condensate in the U.S. has increased from about 450 Mb/d in 2009 to 1.2 MMb/d in 2014 and could increase to 1.8 MMb/d over the next 5 years depending on a number of factors, the most important of which is the price of crude oil. Similarly, the production of plant condensate, also called natural gasoline or pentane plus, has also increased, although on a smaller scale up by 160 Mb/d to 430 Mb/d between 2009 and the third quarter of 2014. Plant condensate output could increase to 600 Mb/d over the next 5 years.

This report describes the extraction and production of both field and plant condensate. We provide actual and forecast production data as well as an explanation of their markets expected levels of demand over the next five years. We explain why both products are likely headed for a surplus in the U.S. domestic market and discuss possible export markets that could soak up that surplus. Finally we cover potential competition between field and plant condensate in export markets as well as the possibility that those export markets could fail to materialize.

Blinded by the Lights is the 12th in RBN Energy’s Drill Down report series, a suite of twelve reports from RBN during 2014 covering many of the key issues expected to impact the markets for crude oil, natural gas and natural gas liquids.