Ventura Highway - Is a DOE-Backed Clean Hydrogen Hub in California’s Future?
Get our Daily Blog Email

Most Americans only come into contact with the Jones Act when they wonder why their cruise ship stopped off at a foreign port. This maritime legislation from a bygone era (1920) is nearly a century old. The Jones Act increases costs for US coastal shipping. That constraint has restricted the availability of waterborne options to alleviate recent US energy supply bottlenecks. Today we look at the impact of the legislation in energy markets.

The US American Phoenix, a 339 MBbl oil tanker built in Mobile, AL was launched earlier this year on June 21, 2012 (see picture below). The American Phoenix is the only US built tanker to be launched so far in 2012. On her maiden voyage in August the American Phoenix delivered a cargo of gasoline from Lake Charles, LA to Port Canaveral FL, two United States ports. 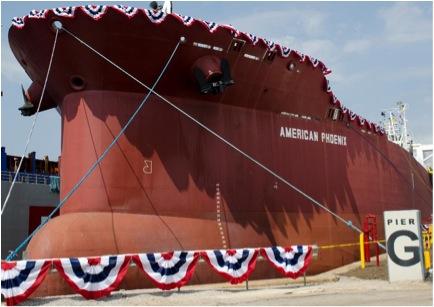 The American Phoenix is a Jones Act vessel. The Jones Act is actually the Merchant Marine Act of 1920, although it came to be known as the Jones Act after its sponsor Senator Wesley Jones. The Merchant Marine Act is a federal statute that regulates maritime commerce in U.S. waters and between U.S. ports. Section 27, better known as the Jones Act, deals with cabotage (coastal shipping) and requires that all goods transported by water between U.S. ports have to be carried in U.S.-flag ships, constructed in the United States, owned by U.S. citizens, and crewed by U.S. citizens and U.S. permanent residents. That’s why your cruise ship stops off at a foreign port – to keep staff costs down by avoiding the Jones Act. There’s a reason that buffet is bottomless.

Also regulated by the Jones Act is the repair or refurbishment of ships at overseas shipyards. The provision limits foreign repair work on the hull and superstructure of a U.S.-flagged vessel. That means once a US flagged vessel is built you can’t go and get cheap repairs at some body shop down in the islands. Although interested parties get very animated either way defending or criticizing the Jones Act, its original intention was admirable - to ensure the existence of a strong US merchant marine as part of national security.

Several other regulations since the Jones Act also impact the operation of US flag vessels. The Oil Pollution Act of 1990 requires double hulling of U.S. coastal tank vessel fleets by 2015. The Maritime Security Act of 1996 created the Maritime Security Program (MSP). The MSP provides a fixed retainer payment to U.S.-flag vessel owners in exchange for providing the Department of Defense with assured access to their vessels and related transportation services and infrastructure during times of war, national emergency, or when otherwise deemed necessary by the Secretary of Defense. In October of 2011 the MSP paid participating owners about $8,500 /day. That subsidy can be viewed as compensation  for Jones Act restrictions.