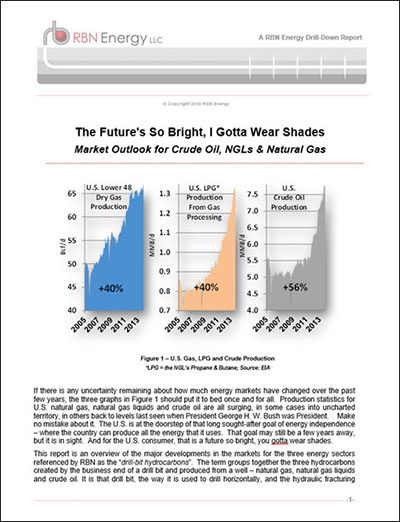 Production statistics for U.S. natural gas, natural gas liquids and crude oil are all surging, in some cases into uncharted territory, in others back to levels last seen when George H. W. Bush was President. Make no mistake about it. The U.S. is at the doorstep of that long sought-after goal of energy independence – where the country can produce all the energy that it uses. That goal may still be a few years away, but it is in sight. And for the U.S. consumer, that is a future so bright, you gotta wear shades.

This new RBN Drill Down report is an overview of the major developments in the markets for the three energy sectors referenced by RBN as the “drill-bit hydrocarbons”. The term groups together the three hydrocarbons created by the business end of a drill bit and produced from a well – natural gas, natural gas liquids and crude oil. It is that drill bit, the way it is used to drill horizontally, and the hydraulic fracturing techniques applied downhole once the well has been drilled, along with other technologies facilitating the process of drilling and completing wells, that launched and continues to drive the Shale Revolution.

The analysis begins with an overview of natural gas, NGL and crude oil production trends. The remainder of this report then reviews:

The Future's So Bright, I Gotta Wear Shades is the third in RBN Energy’s Drill Down report series, a suite of twelve reports coming from RBN during 2014 covering many of the key issues expected to impact the markets for crude oil, natural gas and natural gas liquids.