Exports Rose As New Terminals Came Online, But What Now? 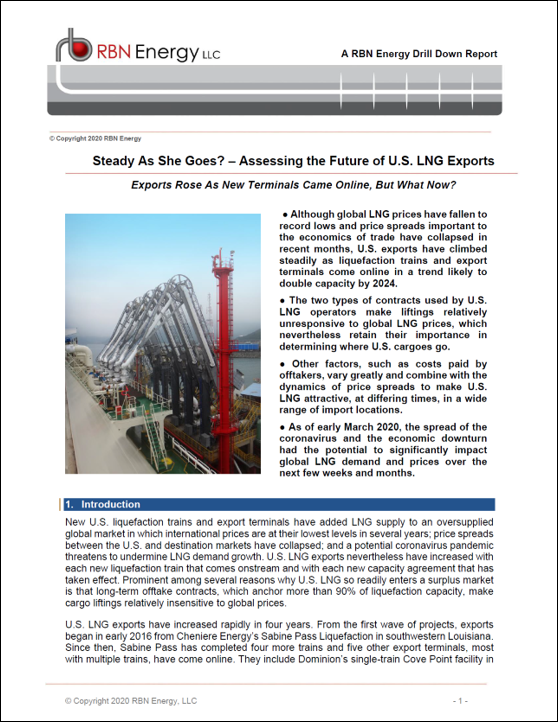 New U.S. liquefaction trains and export terminals have added LNG supply to an oversupplied global market in which international prices are at their lowest levels in several years; price spreads between the U.S. and destination markets have collapsed; and a coronavirus pandemic threatens to undermine LNG demand growth. U.S. LNG exports nevertheless have increased with each new liquefaction train that comes onstream and with each new capacity agreement that has taken effect. Prominent among several reasons why U.S. LNG so readily enters a surplus market is that long-term offtake contracts, which anchor more than 90% of liquefaction capacity, make cargo liftings relatively insensitive to global prices.

In this Drill Down Report, we show how contract design and offtake patterns thus far have kept U.S. LNG flowing to international markets - seemingly in defiance of price relationships — and how LNG exports are contributing to a reshaping of the domestic market in a way that is likely to make gas prices increasingly volatile.

Steady As She Goes is included in RBN Energy’s 2020 Drill Down report series, a suite of reports covering many of the key issues expected to impact the markets for crude oil, natural gas and natural gas liquids. Drill Down reports are part of RBN Backstage Pass™ premium resources that also include Blog Archive Access, Spotcheck Indicators, Market Fundamentals Webcasts, Get-Togethers and more. By subscribing to RBN’s Backstage Pass™ Premium Services, you plug into our network and get direct access to our premium resources.