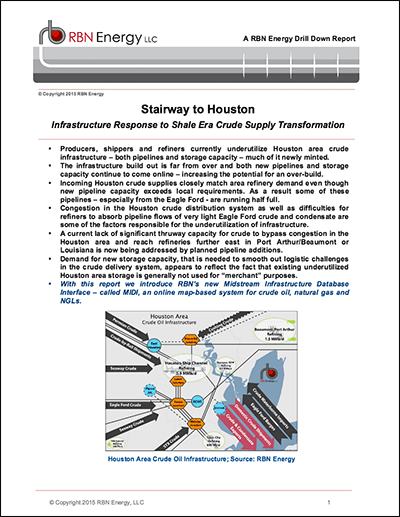 Prior to 2011, Houston area refineries were primarily supplied with crude by waterborne imports or pipelines delivering offshore Gulf of Mexico or domestic Louisiana production. That was before the surge in domestic production of light sweet crude oil in the shale era that has seen U.S. crude output increase by roughly a million barrels per day each year between 2011 and 2014. Three production basins have provided the majority of this growth – the Williston Basin in North Dakota (the Bakken), the Eagle Ford in South Texas and the Permian Basin in West Texas. Supplies from North Dakota rapidly overwhelmed refinery demand in the Midwest during 2011 and 2012 requiring a re-plumbing of the existing crude distribution system to deliver inland crude to refineries located at the Gulf Coast. Increased supplies from the Eagle Ford and Permian have also increasingly been directed via new and repurposed pipelines to the Gulf Coast region that is home to 50% of the nation’s refining capacity (9 MMb/d).

This pipeline re-plumbing process took time and was preceded by workarounds to relieve the congestion such as crude-by-rail transport. But since 2012, a flood of new domestic light crude began to arrive in the Houston area by pipeline – replacing the need for overseas imports of similar quality crudes. Another new source of crude deliveries to the Houston area has come in the form of heavy Canadian crude delivered by pipeline (and to a lesser extent by rail) from Western Canada to the Gulf Coast. In all nearly 3.7 MMb/d of incoming pipeline capacity into the Houston area was built and came online between 2012 and 2015. More than 1MMb/d of additional capacity is expected online by 2016.

This report is an assessment of Houston area crude oil infrastructure and includes a step-by-step build out of a crude supply/demand balance in the area in Section 2. The results of the crude balance show that despite significant new incoming crude pipeline capacity being online, these pipelines are still largely delivering only to meet local refinery requirements – meaning that they are underutilized. Reasons for new pipelines being underutilized are explored in Section 3, including an examination of the impact of crude quality issues and export constraints on the existing crude logistics system. A major limitation for producers and shippers delivering crude into Houston is the lack of thruway pipeline capacity to refineries located east of Houston in Beaumont/Port Arthur, TX as well as further along the Gulf Coast in Louisiana. Section 4 reviews plans underway to extend thruway capacity that may allow pipelines coming into Houston to deliver greater volumes to the Eastern Gulf region in the future.  In Section 5 we compare regional crude inventory levels for the Gulf Coast to the utilization of Houston storage – finding that the latter is about 50% underutilized.

Stairway to Houston: Infrastructure Response to Shale Era Crude Supply Transformation is the ninth of RBN Energy’s Drill Down report series, a suite of twelve reports coming from RBN during 2015 covering many of the key issues expected to impact the markets for crude oil, natural gas and natural gas liquids.