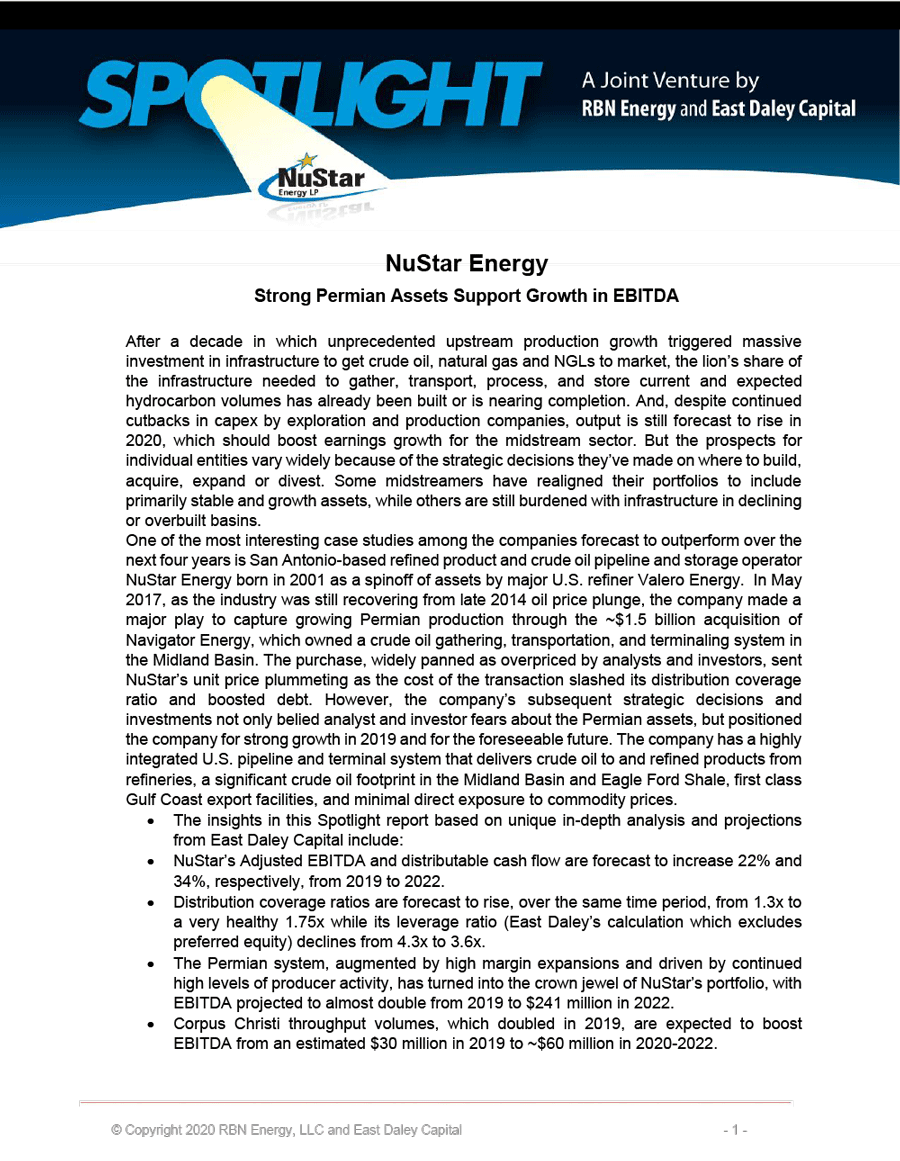 One of the most interesting case studies among the companies forecast to outperform over the next four years is San Antonio-based refined product and crude oil pipeline and storage operator NuStar Energy, born in 2001 as a spinoff of assets by major U.S. refiner Valero Energy.  In May 2017, as the industry was still recovering from late 2014 oil price plunge, the company made a major play to capture growing Permian production through the ~$1.5 billion acquisition of Navigator Energy, which owned a crude oil gathering, transportation, and terminaling system in the Midland Basin. The purchase, widely panned as overpriced by analysts and investors, sent NuStar’s unit price plummeting as the cost of the transaction slashed its distribution coverage ratio and boosted debt. However, the company’s subsequent strategic decisions and investments not only belied analyst and investor fears about the Permian assets, but positioned the company for strong growth in 2019 and for the foreseeable future. The company has a highly integrated U.S. pipeline and terminal system that delivers crude oil to and refined products from refineries, a significant crude oil footprint in the Midland Basin and Eagle Ford Shale, first class Gulf Coast export facilities, and minimal direct exposure to commodity prices.

The insights in this Spotlight report based on unique in-depth analysis and projections from East Daley Capital include:

Spotlight: NuStar is included in RBN Energy’s 2020 Drill Down report series, a suite of reports covering many of the key issues expected to impact the markets for crude oil, natural gas and natural gas liquids. Drill Down reports are part of RBN Backstage Pass™ premium resources that also include Blog Archive Access, Spotcheck Indicators, Market Fundamentals Webcasts, Get-Togethers and more. By subscribing to RBN’s Backstage Pass™ Premium Services, you plug into our network and get direct access to our premium resources.

For more information on our friends at East Daley Capital, please visit: https://rbnenergy.com/partners/east-daley-capital-advisors