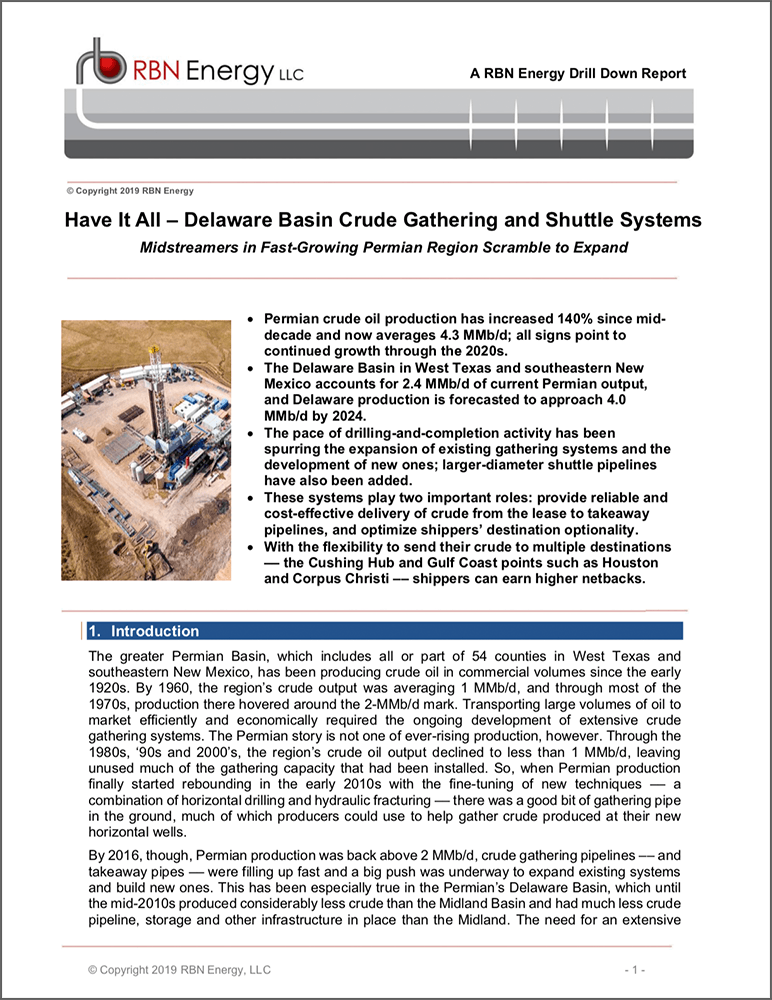 The greater Permian Basin, which includes all or part of 54 counties in West Texas and southeastern New Mexico, has been producing crude oil in commercial volumes since the early 1920s. By 1960, the region’s crude output was averaging 1 MMb/d, and through most of the 1970s, production there hovered around the 2-MMb/d mark. Transporting large volumes of oil to market efficiently and economically required the ongoing development of extensive crude gathering systems. The Permian story is not one of ever-rising production, however. Through the 1980s, ‘90s and 2000’s, the region’s crude oil output declined to less than 1 MMb/d, leaving unused much of the gathering capacity that had been installed. So, when Permian production finally started rebounding in the early 2010s with the fine-tuning of new techniques — a combination of horizontal drilling and hydraulic fracturing - there was a good bit of gathering pipe in the ground, much of which producers could use to help gather crude produced at their new horizontal wells.

By 2016, though, Permian production was back above 2 MMb/d, crude gathering pipelines - and takeaway pipes - were filling up fast and a big push was underway to expand existing systems and build new ones. This has been especially true in the Permian’s Delaware Basin, which until the mid-2010s produced considerably less crude than the Midland Basin and had much less crude pipeline, storage and other infrastructure in place than the Midland. In the first part of our two-part Drill Down Report on Permian crude oil gathering systems, we focused on representative systems within the Midland Basin. In this report - Part 2 - we look at systems in the Delaware Basin.

Have It All, Part 2 is included in RBN Energy’s 2019 Drill Down report series, a suite of reports covering many of the key issues expected to impact the markets for crude oil, natural gas and natural gas liquids. Drill Down reports are part of RBN Backstage Pass™ premium resources that also include Blog Archive Access, Spotcheck Indicators, Market Fundamentals Webcasts, Get-Togethers and more. By subscribing to RBN’s Backstage Pass™ Premium Services, you plug into our network and get direct access to our premium resources.