Last week the U.S. NGL markets entered uncharted territory.   According to OPIS, cash propane prices in the Conway, KS market reached almost $5.00/gallon for a time, responding to a massive product shortage across the entire eastern half of the country.  But at the same NGL hub, OPIS also reported that the price for ethane/propane mix (EP mix) dropped deep into negative territory at $(0.50)/gallon.  That’s crazy.  The seller is paying the buyer to take the product.  Nothing like this has been seen before in these markets.  Propane inventories continue to drop, transport trucks are moving product hundreds of miles to markets, terminals remain on allocation and a state of emergency has been declared by at least 20 state governors.  The inventory graphs look so scary that the Black Swan is frozen stiff.   Today we begin a series on the NGL markets of 2014, a year that this industry will be talking about for a long time.

Conway, Kansas is the second largest NGL hub in North America.  Only the huge NGL hub at Mont Belvieu, TX is larger.  Conway is a major distribution point for the Midwest.  The last three days in that market have been totally unprecedented.

Let’s start with the biggest news of the week.  Propane prices at Conway are exorbitant and ethane prices have plummeted.  As you can see in Figure #1 below, propane prices at Conway were up to $4.32/gallon when they were only $0.80 in June and $1.40 as recently as two weeks ago.  It’s worth noting that though prices for the day Friday were in the $4.00 to $4.65 range, at one point on Thursday they reached as high as $4.935.  That’s getting pretty close to $5.00/gallon, which – if you like to think in barrels – is $210 per barrel! 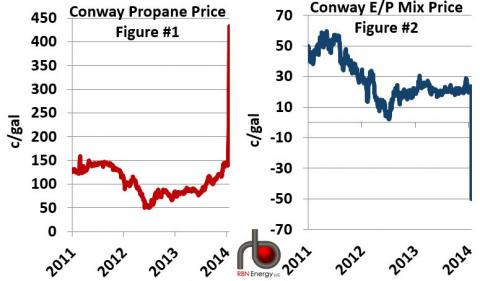 On the flip side of the coin, the strangest development in this saga is that Ethane/Propane Mix (E/P) at Conway has dropped to $(0.50)/gallon from around a positive $0.20 where it’s been since April (Figure #2).  Note to those unfamiliar with the NGL business – prices are not supposed to go negative.

Propane prices are sky high for three primary reasons but at the end of the day, it’s all about supply and demand.  We’ll look at what’s driving the demand side first.  Of course, the weather plays a huge factor but that’s not the only culprit.  Grain drying and exports have also played a major role.

But let’s address the icy cold gorilla in the room, the weather, first.  The well-publicized polar vortex gripped the country for the initial weeks of the New Year but, as seen in Figure #3 below, we have been experiencing periods of extremely low temperature since December and it’s still pretty cold out there. 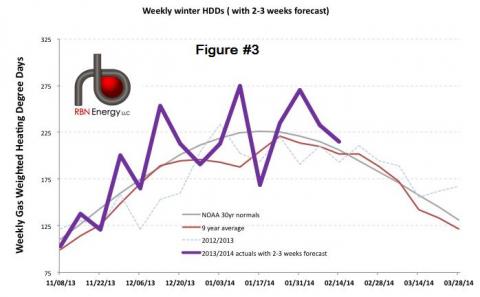 The graph above from our friend Brison Bickerton at Freepoint Commodities shows winter heating degree days.  For you technicians, these are natural gas weighted numbers, but they tell a similar story for propane.  We’ve discussed HDD’s in the past (See Under the Weather) so we aren’t going to spend any time explaining the concept today.  Suffice to say that that purple line (2013-14 degree days) is well above the gray and red lines (30 year normal weather and the last nine year average).

Of course, you don’t need this graph to tell you that it has been awfully cold outside but experts like Brison say that cold is looking more and more enduring.  You will notice that the purple line does extend into February, representing the impact of forecasted weather.  From a trading viewpoint, history and two weeks of HDD forecasting are baked into the models and presumably factored into market prices.  Across the country, folks who use propane as their heating fuel have driven demand and now we see that demand is likely to stay strong for at least the next few days.  But we’ve had cold winters before.  If that was all that was going on, high demand would be met with supply and life would go on without much disruption.

However, our problem with surging demand is compounded by the fact that we also have relatively low inventories for this time of year.  Why are inventories low?  You guessed it, the weather – but perhaps not the weather you’re thinking about.  Corn growing conditions in the Midwest last year (lots of rain at the end of the season) led to a bumper crop of “wet” corn.  That corn had to be dried out before it could be stored, and it is propane that is the primary fuel used for corn drying (See Farmer Dries Corn and I Do Care).   According to the Propane Education and Research Council (PERC), this year we used five times more propane than we do in a normal year [1].  To get a sense of just how substantial a volume we’re talking about, look at Figure #4 below which shows the current inventory in the Midwest (PADD II) plotted against the previous five years’ high-low range of stocks.

What this tells us is that the Midwest propane stocks, which usually rise to about 30 MMB during the fall shoulder months, only got up to about 24 MMB last year.  More importantly, propane inventories are as low now as they usually get at the end of the withdrawal season, and there are still two months of winter left.  In the first four weeks of 2014, propane stocks in PADD II were drawn down by an average of 1.36 MMB/week.  There are only 10 million barrels left in PADD II.  So if draws were to continue at that rate, and nothing else changed, the Midwest would be out of propane by early March.  Let that sink in.

It is no secret that the situation is serious.  At least 20 states, as far south as Louisiana, have now issued emergency declarations regarding propane and how to get it to market.

Fortunately, the state of affairs is not so dire in the Gulf Coast region – what is known as PADD III. The graph below in Figure #5 shows propane stocks on the Gulf Coast (PADD III).

While PADD III stocks are on the low end of their trailing five year range, the good news is that there are still 20 million barrels of propane remaining in storage.    That fact is reflected in the price for propane in the region, which is running about $1.51/gallon in Mont Belvieu according to OPIS – far below the price in Conway.  However, inventories are low for this time of year, which has certainly tightened up the market.

Now we know what you’re thinking.  “Aren’t you guys at RBN always telling us we’re going to be up to our eyeballs in NGL’s because of shale?” Well that’s still true in some places but the fact is that over the past couple of years the industry has been getting geared up to handle an NGL oversupply situation.  Most of the infrastructure that has been built moves NGLs (including propane) to PADD III – primarily Mont Belvieu (See She Don't Lie, She Don't Lie, Propane) for fractionation and export.   In 2013, Enterprise and Targa completed major expansions of their dock facilities for the export of propane, and those facilities have been getting heavy use.

In fact, in October, U.S. propane exports exceeded 400 MB/d (Figure #6).   That is an all-time record and something we’ll explore more deeply in the second installment of this series later this week.

Since October, we understand that exports have remained at or near those record levels.  That might seem surprising since we are into the winter propane season.  But don’t assume exports should go away just because supply is tight and prices are higher here in the U.S. That is the case for at least three reasons.

First, the product for many cargos was hedged, so the buyer is not exposed to the run-up.  So many of those cargos will go anyway.

Second, some cargos are going to markets that either (a) have the ability to increase the price at the other end to make up for higher prices here, or (b) are not short-term price sensitive in the first place.

Third, some buyers have the ships on long term commitments.  So basically shipping is a sunk cost, so to speak.  That means they will be more likely to ship than not to ship, especially if they can’t find another market for their vessel.

Bottom line, a tight supply demand balance does not necessarily mean that there will be a shut-down of the export window.  Exports will continue to impact the overall propane balance.

Besides exports, there is another interesting phenomenon, which has affected inventories that may be shaping up at Mont Belvieu.  It has to do with ethane rejection so, if you’re not familiar with the concept, read the Ethane Asylum and The Gas is Hot Tonight.  Because ethane rejection has been so significant, not nearly as much Y-Grade (raw make, mixed NGLs that includes ethane and propane) has flowed into Mont Belvieu as would have otherwise been expected.  As a result, Y-Grade inventories are understood to be lower than normal.  Though there is still some in storage, we have heard on the street that there may now be a problem with the availability of brine to get it out.  In order to push NGL’s out of a storage cavern, brine has to be put in to displace it.  Therefore as the total volume of Y-Grade in storage decreases, the amount of brine required goes up.  At this point we have not heard about any brine shortages, but it will be a factor to watch closely.

It sounds like the industry has been snake bit lately, and Mont Belvieu ethane is an example of that.  OPIS reported that price on January 15th as $0.29/gallon.  It was up to $0.42/gallon on Thursday, and it hit $0.48/gallon on Friday before settling back to $0.45.  Reportedly, the price kick on Friday had something to do with a report from Genscape that said all five of the Enterprise fractionator units they monitor were shut down.  We don’t have any confirmation of this.  Genscape later said most if not all of the units are back on line.  But it is just one more example of the issues that just seem to keep hitting the NGL market lately.

To access the remainder of A Perfect Storm – Polar Vortex Turns Propane and other NGL Markets Upside Down you must be logged as a RBN Backstage Pass™ subscriber.