Spectra Energy purchased the 280 Mb/d Express pipeline from Kinder Morgan in December 2012. The Express originates in Hardisty and ships crude to Caspar WY where it connects with the Platte pipeline into the Midwest. The Express is small compared to the huge 2.5 MMb/d Enbridge mainline and the planned 1.1 MMb/d TransCanada Energy East pipelines but it is not the smallest export pipe from Hardisty. That honor belongs to the Inter Pipeline Bow River that ships less than 100 Mb/d of crude across the border into Montana. Today we continue our Canadian crude storage series describing Edmonton and Hardisty crude oil infrastructure.  And further down in this blog we announce that everyone attending our School of Energy - Session A in March will be joining us for the Brad Paisley concert at the Houston Rodeo!

This is Part 7 in our series on Canadian crude oil storage. In Part 1 we looked at increasing Canadian crude oil production and expanding pipeline capacity in the two crude marketing hubs of Edmonton and Hardisty. These hubs are the staging posts for crude oil exports to the US as well as the distribution point for diluent supplies coming into the oil sands production region. In Part 2 we turned our attention to the relationship between Canadian crude pricing, congestion on the crude pipelines leaving Edmonton and Hardisty, and storage inventory. The growth and use of storage capacity at Edmonton and Hardisty bears a strong relationship to price discounts that Canadian producers have had to swallow as a result of pipeline congestion. In Part 3 we looked at TransCanada and MEG Energy’s Edmonton storage expansion plans. In Part 4 we reviewed Kinder Morgan, Kayera, Gibson Energy, Enbridge and Pembina’s growth projects at Edmonton. For Part 5 we turned our attention to the Hardisty hub and detailed Enbridge and Husky’s operations. Part 6 covered TransCanada and Gibson Energy at Hardisty. This episode covers Spectra Energy, Flint Hills and Inter Pipeline’s Hardisty operations. The next and final episode covers storage infrastructure in Kerrobert, Saskatchewan.

Created in 1997, Inter Pipeline (IPL) is an international energy transportation, storage and natural gas liquids extraction company based in Calgary, Alberta. IPL gather and transport approximately 40 percent of oil sands production to Edmonton and Hardisty. The company owns the Corridor and Polaris (diluent) pipeline systems and an 85 percent interest in the Cold Lake pipeline system (Canadian Natural Resources own the other 15 percent). The combined capacity of IPL’s oil sands pipelines is 4.5 MMb/d and growing as production ramps up. IPL’s committed revenue from pipeline shippers is expected to almost double from $210 Million in 2014 to $400 Million by 2018. The map below shows the crude pipeline network as well as the company’s natural gas liquids processing facilities. 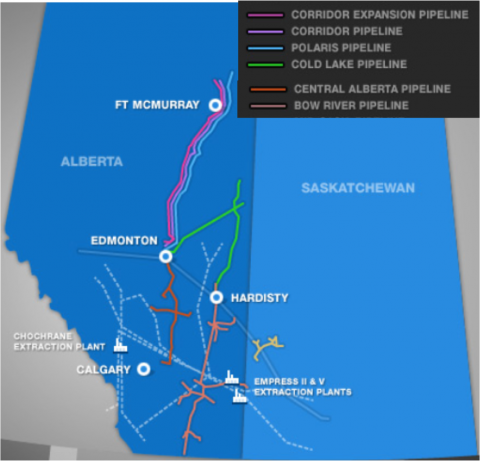 The IPL Bow River Pipeline system (orange line on the map) gathers oil production in southern Alberta for delivery north to Hardisty and south to the Milk River interconnecting export pipeline near the Montana border. The Milk River pipeline connects to the Cenex pipeline in Montana. In 2008, the Bow River system delivered 26 Mb/d into Hardisty and 90 Mb/d to the Montana border. An expansion project started in 2009 allowed crude oil grades sourced at the Hardisty storage hub to be shipped south as a distinct, segregated stream to allow shipping of multiple grades of oil from Hardisty without product commingling with the locally gathered Bow River oil stream (see You Can’t Always Get Out What You Put In for more on crude pipeline stream challenges). Total southbound capacity on Bow River is 129 Mb/d. 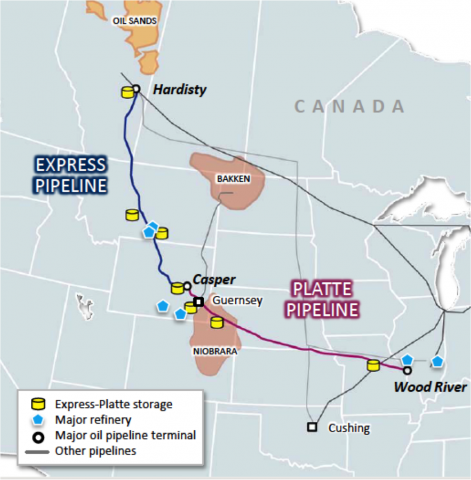 Flint Hills Resources Canada is a large crude oil purchaser, shipper and exporter. U.S. conglomerate Koch Industries owns Flint Hills, which runs a crude trading and marketing operation in Calgary and own a 650 MBbl crude storage terminal in Hardisty. The storage terminal is used primarily as a staging post to supply crude to Koch’s 320 Mb/d Pine Bend Refinery in Minnesota.

Flint Hills feeds the Pine Bend refinery with 90 percent of its supplies from Hardisty. Crude is shipped on the Enbridge Mainline to Clearbrook and then on the Koch owned 455 Mb/d Minnesota pipeline. Crude can also be supplied from Hardisty via the Express and Platte pipelines to Wood River, IL.

To access the remainder of How Oil Get’s Where It’s Goin’ – Pumping Crude Through Hardisty - Plus Brad Paisley Announcement you must be logged as a RBN Backstage Pass™ subscriber.