TransCanada currently owns just over 1 MMBbl of crude storage at Hardisty that is used to stage operations on the existing 580 Mb/d Keystone pipeline to the US. With two huge new pipelines planned to originate at Hardisty – the 830 Mb/d Keystone XL (still awaiting Presidential approval) and the 1.1 MMb/d Energy East potentially coming online in the next four years, the company is rapidly expanding Hardisty capacity. At the same time Gibson Energy and US Development Group are building a 120 Mb/d rail terminal close by to Hardisty that will give Canadian producers the option to bypass pipeline congestion. Today we describe these companies’ infrastructure plans.

This is Part 6 of our series on Canadian crude oil storage. In Part 1 we looked at increasing Canadian crude oil production and expanding pipeline capacity in the two crude marketing hubs of Edmonton and Hardisty. These hubs are the staging posts for crude oil exports to the US as well as the distribution point for diluent supplies coming into the oil sands production region. In Part 2 we turned our attention to the relationship between Canadian crude pricing, congestion on the crude pipelines leaving Edmonton and Hardisty, and storage inventory. The growth and use of storage capacity at Edmonton and Hardisty bears a strong relationship to price discounts that Canadian producers have had to swallow as a result of pipeline congestion. In Part 3 we looked at TransCanada and MEG Energy’s Edmonton storage expansion plans. In Part 4 we reviewed Kinder Morgan, Keyera, Gibson Energy, Enbridge and Pembina’s growth projects at Edmonton. For Part 5 we turned our attention to the Hardisty hub and detailed Enbridge and Husky’s operations. This episode covers TransCanada and Gibson Energy at Hardisty.

TransCanada currently owns three 355 Mb/d storage tanks at Hardisty – just over 1 MMBbl of capacity that is used for staging operations around the original Keystone pipeline. That 590 Mb/d pipeline has been shipping Western Canadian crude successfully from Hardisty to Steel City NB and Cushing, OK since 2010. TransCanada is now in the process of building up terminal operations in Hardisty in the expectation that two new pipeline projects will proceed. The first of these is the long awaited Keystone XL extension that will add 830 Mb/d of capacity between Hardisty and Cushing if it receives Presidential approval – a decision now expected at the end of 2014. The second TransCanada pipeline project out of Hardisty is the proposed Energy East pipeline that will ship as much as 1.1 MMb/d of crude to Eastern Canada. The map below shows the existing and planned major TransCanada pipelines extending out of Hardisty. 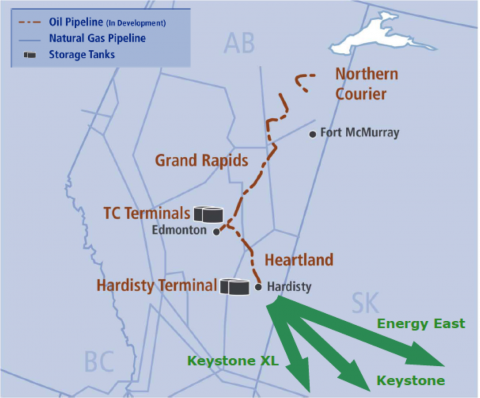 In preparation for expanding crude shipments from Hardisty, TransCanada is beefing up its storage operation in Edmonton as we saw in Part 3 of this series with the TC Terminals project and the Heartland Pipeline from Edmonton to Hardisty that will ultimately ship up to 900 Mb/d. At Hardisty, after a successful open season in 2013, TransCanada has submitted applications for regulatory approval to build an expanded Keystone terminal with 2.6 MMBbl of new storage capacity and pipeline infrastructure to allow producers to move additional crude into the Keystone XL pipeline. Canada’s National Energy Board is currently reviewing the Keystone Terminal Expansion project. If approved, the terminal is expected to be built and online by the end of 2014 at a cost of $275 Million. TransCanada received binding commitments for over 500 MBbl of storage during the open season.

To access the remainder of Edmonton and Hardisty – Storing Crude Oil in Harmony – TransCanada and Gibson at Hardisty you must be logged as a RBN Backstage Pass™ subscriber.