After years of debate and speculation regarding prospects for U.S. exports of liquefied natural gas (LNG), the first cargo left the Gulf Coast around 8:30 pm EST Wednesday (February 24, 2016) from Cheniere’s Sabine Pass terminal, according to Genscape’s global LNG cargo monitoring service. The vessel carrying a little more than 3.0 Bcf of LNG is reportedly bound for Petrobras in Brazil. The incremental export demand that this LNG cargo and others like it to follow represent, is potentially good news for U.S. gas producers, with benchmark futures prices at Henry Hub, LA closing yesterday (February 25, 2016) near record seasonal lows at $1.711/MMBtu in the face of mild winter demand, record production and brimming storage levels. Today we look at how this first cargo was supplied and what that tells us about current and future impact to flows and regional prices.

Genscape’s camera last Monday captured the Asia Vision LNG tanker docked at the Sabine Pass berth with its loading arms connected to the carrier (Figure 1). The tanker is said to have a capacity of nearly 3.4 Bcf. 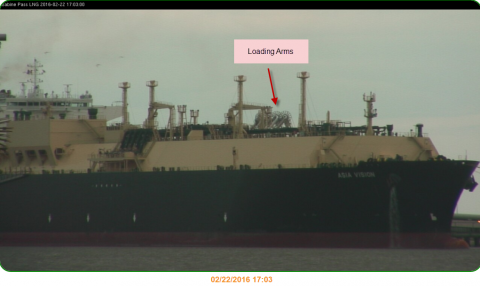 Last time, in Part 1 of Commencing Countdown, we looked at gas flows into the Sabine terminal in preparation for this historic cargo and showed that since Dec. 1, 2015 Sabine Pass received close to 7.5 Bcf of gas supply from two separate pipelines – Creole and NGPL –as part of start-up testing and commissioning activities for the first two liquefaction trains. Since then, receipts have climbed to more than 8 Bcf. Of that, 4.0 Bcf (50%) has come from Creole Trail while the other half has come from NGPL. These volumes are not large enough to make a dent in the overall U.S. supply/demand balance. However, they may provide an early indication of how the terminal and subsequent exports will be supplied. So this time we look at where the gas is coming from. To pinpoint that, we first started with pipeline flow data from Genscape’s Natural Gas Analyst querying tool. Figure 2 shows the daily gas volumes posted for receipts at the Natural Gas Pipeline of America (NGPL) and Chenier Creole Trail pipeline interconnects upstream of the Sabine terminal. In the case of NGPL, since it directly connects to the terminal, the receipt and delivery point is one and the same.

To access the remainder of Commencing Countdown, Engines On – Natural Gas Flowing To Sabine Pass LNG Export Plant – Part 2 you must be logged as a RBN Backstage Pass™ subscriber.