Big changes are coming to the LPG market in Mexico.  LPG, or liquefied petroleum gas, is mostly propane but can include butane.  Mexico is one of the largest consumers of LPG in the world and imports significant volumes from the U.S.  Historically Petróleos Mexicanos (Pemex) has been the only legal LPG importer of record, standing between suppliers and Mexico’s buyers.  But in January 2016, Pemex will lose that status, and a year later the regulations that have capped Mexican LPG retail prices will be eliminated.  Today, we consider how opening up of the LPG south of the border may affect Mexican LPG importers and consumers, and U.S. producers and exporters.

Our blog post yesterday (August 18, 2015) detailed evolving Mexican plans to import light crude from the U.S. under a licensed swap arrangement (see Have Another Swap). This time we turn our attention to deregulation of our southern neighbor’s LPG market and the prospect for increased imports from the U.S. For decades (and with strong encouragement from its federal government), Mexico has been consuming more LPG (mostly propane but including some butane, two members of the natural gas liquids – NGL – family) than all but a half-dozen other nations: the U.S., China, Saudi Arabia, Japan, India and Russia. In the first six months of 2015, LPG sales within Mexico averaged about 280 Mb/d, which is pretty much what sales have averaged the past several years. Of the total volume of LPG sold and consumed in Mexico, about two-thirds is currently produced domestically (that is, within Mexico; blue-shaded area on Figure 1); the rest (about 93 Mb/d) is imported, with about 70% of imports (66 Mb/d) coming from the U.S. (yellow-shaded area) and the balance coming from other countries (red-shaded area). As we have discussed previously the U.S. has become a significant exporter of LPG (propane in particular) over the past two years as U.S. production has ramped up and midstream companies have built out marine terminals along the Gulf Coast.  The U.S. exported over 400 Mb/d in early 2014 (see Boats to Build and Sail Away) and over 700 Mb/d in July 2015.  A substantial majority of LPG import volumes into Mexico are delivered by ship; pipelines play a role too, as do trucks and railroads. 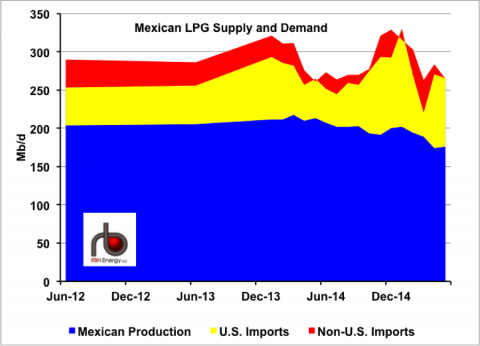 About 60% of Mexican LPG consumption is tied to residential use (cooking, space heating and water heating). Commercial customers (stores, offices and the like) account for about 14%, vehicular use (by cars and trucks) adds up to 10% or so, and industrial use (include petchem) accounts for about 9% (“other” uses make up the remaining 7%).  The LPG is mostly propane, but for the residential/commercial market, butane is often mixed with the propane – particularly in hot summer months – to reduce the vapor pressure in the small containers used to distribute most LPG in Mexico.  Most of the butane mixed with propane is sourced from Mexico production, so most imports are propane-only.

To access the remainder of Enciende Mi Fuego (Light My Fire)—A New Era in Mexico’s LPG (Propane) Market you must be logged as a RBN Backstage Pass™ subscriber.