Keep It Comin' Love – Permian Crude Leads Growth, But Will Gas Processing Capacity Keep Up?
Get our Daily Blog Email

The shift from diesel to LNG (and sometimes CNG or field gas) as a fuel for drilling rigs and hydrofracturing pump engines is underway, and there is interest in having ships, locomotives and long-haul trucks run on natural gas from LNG too. But before investing in new or converted engines that can run on natural gas or on a diesel-natural gas blend, diesel and shipping fuel users need answers to three questions: What will it cost? How much will we save? And—this is important, too--is the LNG infrastructure sufficiently robust to support the switch?Today we explore the economic ins and outs of converting from diesel to gas, and describe the current state of domestic LNG supply infrastructure.

With US natural gas selling at roughly one-quarter the price of crude oil on a per-BTU basis, it is not surprising that major consumers of diesel (an oil-based fuel whose pricing is closely linked to crude) are exploring the possibility of switching to natural gas from LNG. As we said in our Series Opener on the domestic use of LNG, diesel engines that power drilling rigs, fracking pumps, locomotives and long-haul trucks can be converted to dual-fuel operation or replaced with natural gas-only engines, as can ship engines now fueled by marine distillate or bunker fuel. LNG, produced mostly with modest-size (less than 200 Mgal/d) plants sited near major customers, is seen as a logical, cost-effective and consistent quality source of gas. LNG also stores several times as much gas per gallon volume as CNG (helping with weight and storage space). But there are significant costs involved in making a switch, and even some risk—the biggest of which is whether, after making the investment to change to dual-fuel or all-gas engines, you can count on LNG to be available when and where you need it. To help sort out the economics and the risk, let us first look at what is involved in switching engines from diesel (or shipping fuel) to dual-fuel or all-gas.

A diesel engine uses compression (and not a spark plug) to initiate combustion. A dual-fuel engine can either be fueled by diesel only or by a mix of diesel and gas. When it is in diesel-only mode, it operates just like a diesel engine does. When it is switched to dual-fuel operation, a mix of air and natural gas (vaporized LNG) is drawn into the cylinder, just as it would in a spark-ignited engine. Near the end of the compression stroke, diesel fuel is injected, and with the compression it ignites, and the natural gas is ignited with it (see Figure #1). 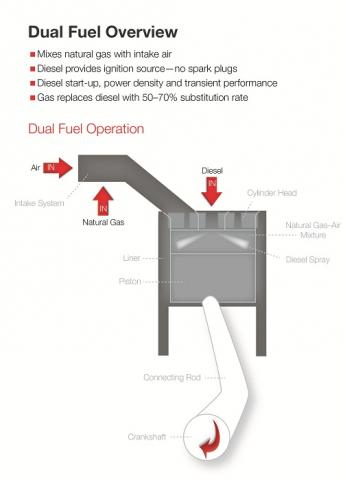 A typical drilling rig is powered by three diesel engines, and many have a back-up generator just in case. Converting each engine so it can burn a mix of natural gas and diesel (typically 50% to 70% gas and 30% to 50% diesel) can cost upwards of $75,000 (or a total of $300,000 for one drilling rig), and other LNG-related costs (including storage tanks and a vaporizer) can more than double that per-rig cost. Frack pumps also require several engines for power. Prometheus Energy offers three calculators to help: calculators for switching drilling rigs to dual-fuel engines (http://www.prometheusenergy.com/calc/drilling/dual-fuel/) and to new engines fueled only by LNG-sourced gas (http://www.prometheusenergy.com/calc/drilling/ng/); and a calculator for switching fracking pump engines from diesel to dual-fuel (http://www.prometheusenergy.com/calc/fracturing/dual-fuel/).