Just over a week ago (July 3rd) Reuters reported that Enterprise Product Partners (EPD) sold their first 400 MBbl export cargo of condensate to Japanese trader Mitsui. That export follows private letters from the Bureau of Industry and Security (BIS) to Enterprise and Pioneer that represent a change in the government’s interpretation of 40-year-old legislation banning the export of unprocessed crude and condensate from the US. The apparent relaxation of the rules could open up export opportunities for shale producers – especially in the wet gas / condensate window of the Eagle Ford in South Texas. Today in the first of a two part series we describe existing stabilizer capacity and export routes to market in the Eagle Ford.

Three weeks ago we posted a blog the day after news broke that the US Department of Commerce BIS issued private letters to Enterprise and Pioneer granting them permission to export lease condensate from their Eagle Ford production (see With or Without Splitting and if you are unfamiliar with the whole issue of the lease crude and condensate export ban, reviewing that blog first will make this one easier to understand). Since the private letters were revealed, few other details have emerged, except for confirmation from the two companies concerned that the BIS has accepted their assertion that passing condensate through their wellhead stabilization units represents sufficient processing for the export restrictions to no longer apply. This determination that stabilization is “processing-enough” to allow for exports represents a change to the previously accepted market assumption that condensate needed to be processed into component fractions such as naphtha and NGLs – for example in a condensate splitter – in order to get past the export regulations.

As best we can tell, the implications of this change of emphasis by the BIS are that US shale producers that recover significant volumes of lease condensate at the wellhead will be able to export it, provided it first passes through a stabilizer that includes a distillation process. What does that mean?  Well, the purpose of field stabilization of crude and condensate is primarily to separate out lighter hydrocarbon gases such as methane (aka natural gas) and light NGLs (ethane, propane) from heavier hydrocarbon components in order to reduce the volatile flammable liquid components. The resultant stabilized liquids generally have a specific Reid vapor pressure (RVP – see R*VP Today for a more complete explanation) designed to meet pipeline transportation requirements. For example, the specification for oil delivered to meet a CME NYMEX futures contract commitment by pipeline at Cushing, OK includes the requirement that the RVP is less than 9.5 pounds per square inch (psi) at 100 o Fahrenheit. Because more condensate is produced in the Eagle Ford, the stabilizers used by producers in that play tend to be larger units that incorporate a distillation tower to “cook” the volatile liquids at optimum temperature and pressure levels to remove the lighter components (you can see examples of these towers in Figure #1 below). So if the field stabilizer includes this type of distillation process then presumably the resulting liquids output can be assumed “good-to-go” for export. Unless the BIS change their mind of course. 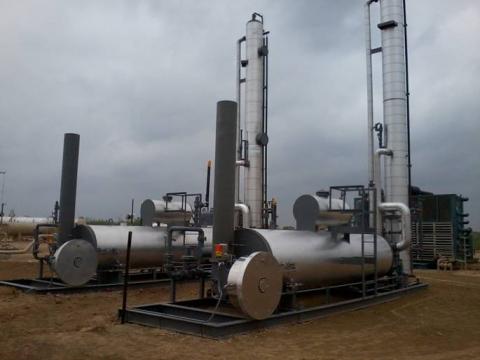 The next question that springs to mind is – how many of these stabilizers are out there and how much condensate do they process that would be available for export? Since these more sophisticated stabilizers are only needed when a lot of condensate is produced, the prospects for producing volumes for export are probably limited – at least initially - to the wet condensate windows of the Eagle Ford play in South Texas and the Utica shale play in Ohio. Of these two, the Utica has less infrastructure in place (see Whole Lotta Splittin’ Going On) and is further from the coast, meaning that prospects for exports from there are limited at the moment. Most of the attention will therefore be initially focused on the Eagle Ford. The map in Figure #2 below shows the extent of the Eagle Ford shale play with shaded areas indicating the dry gas window (peach)  the oil window (green) with the now all-important wet gas / condensate window in the middle (yellow creamy color). Producers with acreage in that wet gas / condensate window are the likely suspects in the search for export volumes.

To access the remainder of You’re A Stabilizer Baby – Eagle Ford Condensate Export Infrastructure you must be logged as a RBN Backstage Pass™ subscriber.